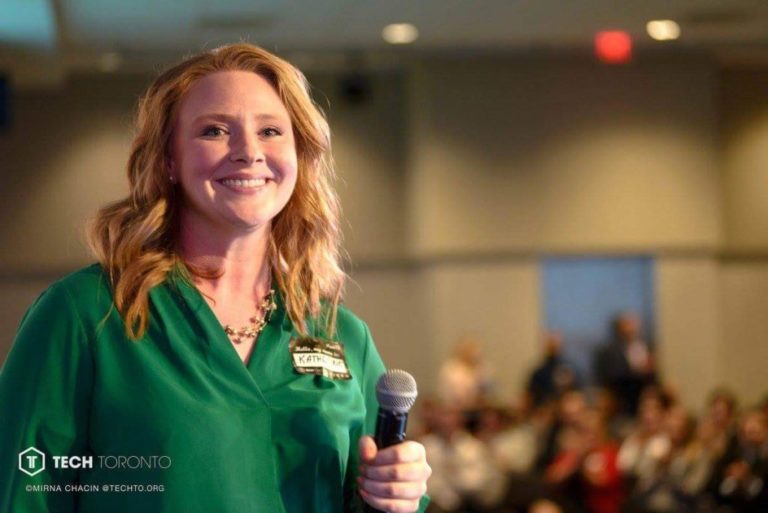 Katherine explains how her view of Silicon Valley changed overnight as a growing bootstrapped business.

At its most recent meetup, TechToronto invited Katherine Regnier, the CEO of Coconut Calendar, an online appointment scheduling platform, to talk about how a little guidance from Silicon Valley helped her scale her startup.

Regnier started her talk by celebrating the fact that they just earned a six-figure deal with US-based Jackson Hewitt, and planned to bring their solution to 6,200 locations. But Regnier’s talk was about how getting to this point wasn’t easy.

Regnier, who started the company in 2007 in Saskatoon, said that when she heard from TELUS — Coconut Calendar’s first-ever client — she decided to take a vacation from her full-time job to fly to Toronto for a meeting. Three months after landing the gig and building the software, she quit her job to grow her business — only to find out that Telus was considering other options for appointment scheduling services.

“I just quit my job. I was three months pregnant, and Romeo [her CTO] just quit his job. So how was I going to go in and say we just lost our only customer and we have to slink back to the place we worked at?” said Regnier. “I was crying like a schoolgirl.”

Luckily, Telus decided to give Regnier the job to integrate Coconut Calendar’s platform, and has since been its client. Still, Regnier added that running her company by bootstrapping came with roadblocks, and after being in business for a few years, she wanted to explore the tech landscape outside of Saskatoon.

“We’re not as different as we think, and [the] people that we see as legends have gone through a lot of the same things we’re going through right now and that made me feel like I can do this.”

Regnier decided to go to Web Summit in Dublin — even though she said she didn’t know why — through which she was asked to come up to Silicon Valley and meet with Neal Dempsey, a general partner at Bay Partners and founder of Neal’s Running Start.

“We were just meeting with rockstars. When I got there, I thought, can I do this? Am I good enough?” said Regnier. “Somebody said…we all have failures. We’re not as different as we think and these people that we see as legends have gone through a lot of the same things we’re going through right now, and that made me feel like I can do this.”

According to Regnier, visiting Silicon Valley helped her see both the Valley and her company in a new light; instead of running Coconut Calendar bootstrapped, she took Dempsey’s tips to start raising capital, hiring more employees, and extending the startup’s reach, which has allowed her to “move faster and harder.”

Looking to boost revenue and deliver a premium experience to your clients? Schedule a consultation with Coconut Software to learn more about how our appointment scheduling solutions can get you there.

Stay in the Loop

Subscribe to our email updates and we'll send you inspiring stories, helpful resources and more.